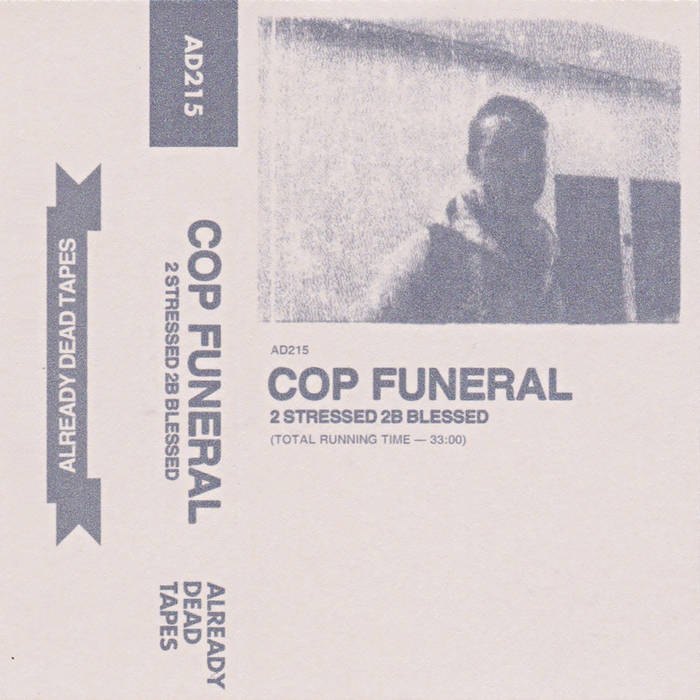 “Under the unexplored seas, where blues and greens get lost in the darkness, deep into the woods which holds folklores and beliefs, inside all the the journal entries of a recently deceased parent there lays stories that need to be told. The teller starts to tell, the reader begins to read and the listener starts to hear.

If you’re familiar with the projects of Cop Funeral, then by all certainties, you’re aware that this is a story teller. On the latest release, ‘2 STRESSED 2B BLESSED’, you’ll get glimpses into the past scenes of American modern history, fond memories of beloved friends and captured audio segments of scenes from the daily life of the artist.

The pains described in harsh loops of feedback, whirling and writhing through the crashing distortions, harmonious anthems of reflections through melodic drones stately attuned after blows of heartache, several blurs of lines crashing and curling – this is ‘2 STRESSED 2B BLESSED’. This is the latest release from Cop Funeral. This is…..well, this is just something you’ll need to give a listen to.”
-Ray Jackson, Already Dead Tapes, 2016

"As founder of Already Dead Tapes & Records, Joshua Tabbia has long been an advocate for music that some might consider challenging or difficult. He's also provided a home for artists whose music relies on his tape distribution to reach their fans. But Tabbia is a musician himself, and when he's not stockpiling cassettes or working on artwork for his releases, he likes to indulge in experimental musical inclinations. More than just random noise holds his work apart from the mass of people who work with dissonance and static on a regular basis. His understanding and recognition of what makes these sounds so involving, despite their inherent caustic nature, is the foundation on which his fractured electronic aesthetic is based.

For "2 Stressed 2B Blessed," his latest release under the Cop Funeral moniker, Tabbia assigns large amounts of jarring noise and static to specific memories and experiences. These tracks document and reveal intricate details through harsh lines of whirring feedback and droning melodies. There is some semblance of structure, but it's buried under so much unfiltered emotion and density that, at times, you're only able to let the sounds pass over you without any idea of understanding—it's pure musical immersion. The realization of what you've just experienced comes later, long after the sounds have faded from your brain and left a permanent imprint of their collective passing."
- Joshua Pickard, Nooga.com