by Darko the Super 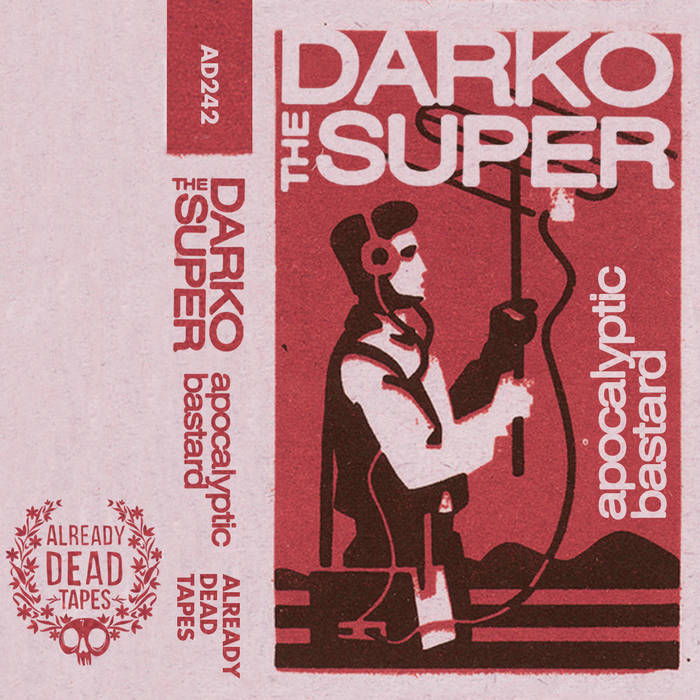 "There may be no other emcee currently active that is more distinct than Darko the Super. 'Apocalyptic Bastard,' the latest album in the Philadelphia native’s ever-expanding body of work, features Darko’s trademark delivery, his self-deprecating lyrical themes, and the rapid-fire culling of popular culture that those familiar with his work will recognize.

Any listener who has consumed a considerable amount of American cinema and music from the last forty-odd years will probably pick up on much of what Darko is droppin’ with gleeful abandon. The rapper possesses an uncanny ability to blend together disparate elements to create an original statement without cheapening the source material or his final product. The end result falls somewhere between mashup and sound collage. From a Wheatus sample juxtaposed with humorously altered Nirvana lyrics (“Teenage angst hasn’t paid off yet”) to the use of Twisted Sister’s “We’re Not Gonna Take It” as a response to the titular demand of the track “Take My CD,” there is a lot for the listener to piece together. The constant use of samples also provides insight into Darko’s emotional connection to certain songs, while also creating a recognizable and relatable world for the listener.

It is important to note that Darko is not nerdcore. This isn’t all fun and games. For every self-burn (“I got the Reeboks but the Pump don’t work/My jump shot needs a lot more work”), there is an equally caustic passage (“I will cut your throat/I will gut you/Don’t tell me to man up/Fuck you”). Furthermore, there is an ever-present sense of impending doom and self-destruction underlying the playful repurposing of songs. Titles such as “Can’t Wait to Die,” “Life is Unfair,” and “The Shape of Death to Come” hammer home the feeling that Darko may not feel all that comfortable on this plane of existence.

'Apocalyptic Bastard' even boasts a strong sense of resentment toward the current social and political climate in the United States on several occasions. A particularly vicious attack on a certain businessman-turned-President sports a fittingly crass title derived from a line in THE EXORCIST (1973) and features lyrics not suitable for the faint of heart (“Men like you are the reason women carry mace” being a lighter example). Darko begins the track by taunting his target a la David Patrick Kelly’s character Luther in THE WARRIORS (1979), sounding genuinely unhinged as he urges “Donny boy” to “come out to play-i-ay.” Sequentially, this comes immediately after an endearing and fairly innocent reimagining of the theme to THE FRESH PRINCE OF BEL-AIR retitled “The Prince of Kalamazoo.” It is that very duality which makes Apocalyptic Bastard such a compelling listen. It was once said that a key element to the classic status of Biggie Smalls’ 'Ready to Die' is that it is a hardcore street album that is also vulnerable. One could say the reverse of 'Apocalyptic Bastard'; it is a vulnerable album that is also menacing."


"Hip-hop is an elastic genre, full of endless twists and dramatic reiterations. It's a way for people to express ideas and feelings that would ordinarily be bottled up deep inside them. And although that could be said of most music, rap has a particularly insightful edge that lends itself to vital introspection. For Pennsylvania-based artist Evan Souza (AKA Darko the Super), this idea of self-evaluation through a pointed emotional immolation lies at the heart of his hip-hop reality. His music is almost uncomfortably intimate—there's a sense of intrusion as we hear him dole out experiences that make us cringe while effortlessly involving us in a larger musical scheme.

On his new tape, "Apocalyptic Bastard," Darko performs a certain self-flagellation through a series of voyeuristic musical acts. The beats are vibrant and shake the walls around you, even as his words detail dramatic and often-unpleasant events from his past. By stripping away the defenses of his own heart, he gives us a glimpse into the mechanics of his own musical and emotional perspectives. With tales of suicide, politics and pessimism, this cassette might not be for the faint of heart, but it feels relevant as a statement of intent. Never looking away, even when confronting the demons of his past and present, Darko the Super distills a pure musical inspiration and documents the resulting devastation."

Featuring Oakland sounds from the Smart Bomb collective and Samplelov.