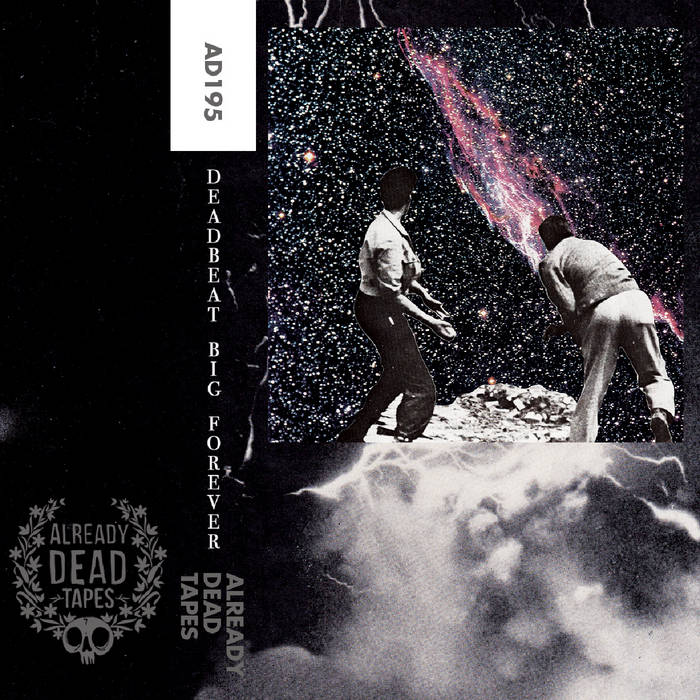 "Deadbeat’s BIG FOREVER is an ever-shifting, continuous seventeen-minute piece of music arranged by Chicago musician Jessica Risker, divided into seven tracks, with guest musicians and samples throughout. After a brief noisy introductory track, the titular second track establishes a synth pattern with electronic percussion that almost seems to be imitating a drum circle. The third track, “Unstable Influences,” blends two chanting voices over a pulse to great effect before breaking into a feast of live percussion, gradually joined by a rising instrumental tension straight out of 1970s horror soundtracks before climaxing into heavenly bliss.

This tingling sensation segues into the album’s centerpiece, “Won’t You Meet Us In Vegas,” a neo-psychedelic/garage rocker with druggy, sultry vocals from Risker that stylistically and atmospherically wouldn’t have been out of place on Temples’ 2014 SUN STRUCTURES record. This is the only number on the record with a more traditional song structure and rock instrumentation. Toward the song’s conclusions, things pick up a la the Count Five’s “Psychotic Reaction” with synthesizer work from Joshua Wentz thrown in for good measure. If that perhaps sounds a bit disparate, hang on to your ego, it only gets weirder. On the following track, “Summer Chanti,” I found myself seeing visions of Orbital’s 1996 IN SIDES album. Not the hypnotic Orbital numbers like “The Girl With The Sun In Her Head” or “The Box,” either, but the nefarious intensity of tracks like “P.E.T.R.O.L.” that sound more like the theme for a gatekeeper in a Sega Genesis game (I was told in 1989 that Sega didn’t have “bosses” like Nintendo, but “gatekeepers.” That may have just been my friend trying to make his system sound superior to mine. He was kind of a jerk).

The beat and groove on “Stop Performing” reminds me of the really wonderfully fucked up parts of Beastie Boys and Beck albums; the spirit of hip hop is there, but weird samples and note choices are employed to deliciously dissonant effect. It’s pretty hype. This whole album is dope. It’s over and done in the blink of an eye. The final track, “Conclusion,” is the only point where there is a break between tracks. This piece bubbles for a bit and then takes a breather before it begins to blossom. Then just as it’s on the rise, it starts cooling down, and bam, the tape’s over. However, the same program is found on Side B, so just flip it over and re-experience it immediately. You’ll hear something new every time. There’s a lot packed into this one. Risker has really constructed a mindbender. Wait until nightfall and listen alone loudly for maximum experience."