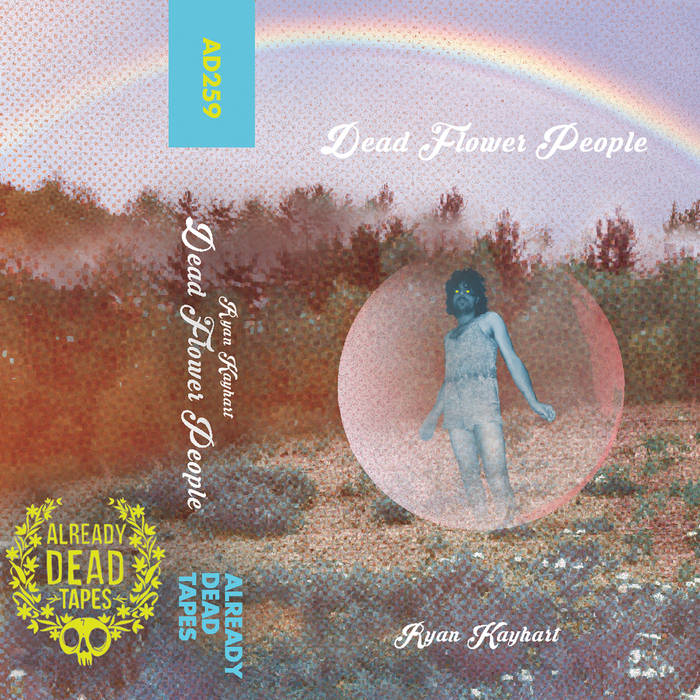 andrew down at wendys bendy bendy bendy i feel so unnecessary Favorite track: They Say It Died of Weed.

Ryan Kayhart returns with an epic followup to his last tape from HEC last summer (which was coincidentally the first tape on that label, which is now among the best coming out of New England)!

It is called 'Dead Flower People,' in what may or may not be a reference to the end of hippy dippy bullshit, paving way for the new “psych” in the age of Florida Man, or it’s just a cool title. Ryan does this Ariel Pink/R. Stevie Moore/early Ween style of pop pastiche, genre hopping far better than most. This is sonically warped weirdo stuff for sure but it’s also just full of great pop songs. This shit rocks, man. There’s elements of ‘90s slacker rock (“Shayla”), new wave ‘80s goth (“Lost Shadows,” lyrics on this one speak to me deeply), ramshackle stoner folk reminiscent of Sebadoh (“Showing Signs”), and that’s just within the first three tracks! The album is cohesive but like most loner-freak-mutants’ sound worlds, it also functions as a mixtape into what Ryan was going through while writing/recording these songs. Epic keyboard/synth/guitar/recorder noodling abounds.

“They Say It Died of Weed,” perhaps my favorite Ryan Kayhart song title, also might be my favorite track on the album. It’s like sky-kissing psychedelia, with tape-warped guitar riffs, drifting through invisible planets at dusk, deep bass, ominous drones, shamanistic percussion, and ritualistic flutes. Fifth World music for sure. Third eye grinder. Of course the lyrics are about being stoned at Wendy's or something… I could write my whole review just based on this song, I’ve experienced this song melodically. It reminds me of tripping in college and then eating fried food after a long day of my brain leaking through my ears out in the woods.

“What of the Child” is deeply bizarre and comforting at the same time. It sounds like a song that was literally dreamt up. Perhaps Ryan recorded it in a dream and somehow managed to take it back to the waking world where it could end up on this tape? “Soup” (also a perfect title for this song) has one of the best guitar riffs I've heard all year. And it’s just guitar and vocals. Super melancholy but life affirming as well. Haunted pop. “Speckled Skies” sounds like weirdo Western Massachusetts freak pop as done by Ryan Kayhart, orbiting in the Joey Pizza Slice/Sam Gas Can mold for sure. “Deep Snow/Not Today” has guest vibes/vocals on it from a fellow called Mike Piss… and it rules.

Biases aside (as Ryan is a close chum), this is definitely primed to be the best psych (pop) album of the year! Ryan’s style has evolved incrementally over countless releases and on this one he’s refined it to a point where the live stuff and the recordings have never been closer. This stuff is simultaneously raw and feels “live” but also really polished, if that makes sense. This dude should be famous.

Rip the bong. Rip this tape."