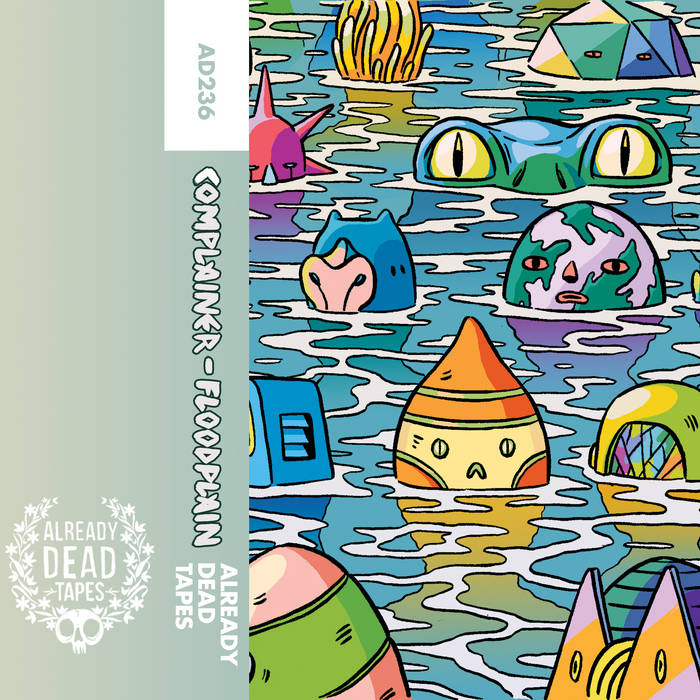 COUNTERZINE Sounds like being stung and trampled to death be angry wasps with very large, muscular legs. 10/10 would die again. Favorite track: Busybody.

Complainer features Mabel Suen (guitar, vocals) and Joe Hess (drums, vocals), ex-Spelling Bee, playing a unique and raw blend of noise-punk. 'Floodplain' is the duo's debut album and was recorded at Loundry Room, a literal laundry room in the small town of Hückelhoven, located in western Germany. Jörg A. Schneider (Jealousy Mountain Duo, Nicoffeine) invited the duo, lent them equipment and engineered the project over two days. Instruments were recorded live with no overdubs while the vocals were recorded in St. Louis, Missouri by Andy Peterson (Trauma Harness) at an old Lemp Brewery warehouse space. The album was mastered by prolific Germany record producer Guido Lucas, known for founding bluNoise Records and the kraut rock collective Lude.

The album's artwork was created by Curtis Tinsley, an ADT&R alum, whose work has been featured in VICE, Village Voice, Eleven Magazine, and more.

"Complainer has a timeless sound. The St. Louis post-punk duo (formerly known as Spelling Bee) would fit in with a giant crate of decades-old punk records. The Floodplain EP is a lo-fi haven flooded with buzz, hum and hiss. It's constantly moving forward with haste punching out riff after riff in a freeform swirl. Vocals bounce back and forth atop a wave of hi-hats and crashes filling up 8 tracks that feel more like one longer piece. It becomes mesmerizing...soothing.

The same framework from the band's 2012 release, Caterwaul, remains. It is not apparent who is following who or what came first, the riff or the beat, it exists as a wall of sound. Floodplain, however, feels in many ways more stripped down while also sounding fuller than previous releases. There are fewer pedals at play perhaps, but Mabel plays with more urgency, filling up space with sheer power. The immense concentration required to create a record so tightly wound passes on to the listener making for something of a catatonic experience. Floodplain is the perfect example of a "close your eyes and take it in" record moving beyond punk into atmosphere. Also, my two year old niece really dug it so big ups for that! Fun for all ages."
- Jacob Watkins, Already Dead Tapes, 2017