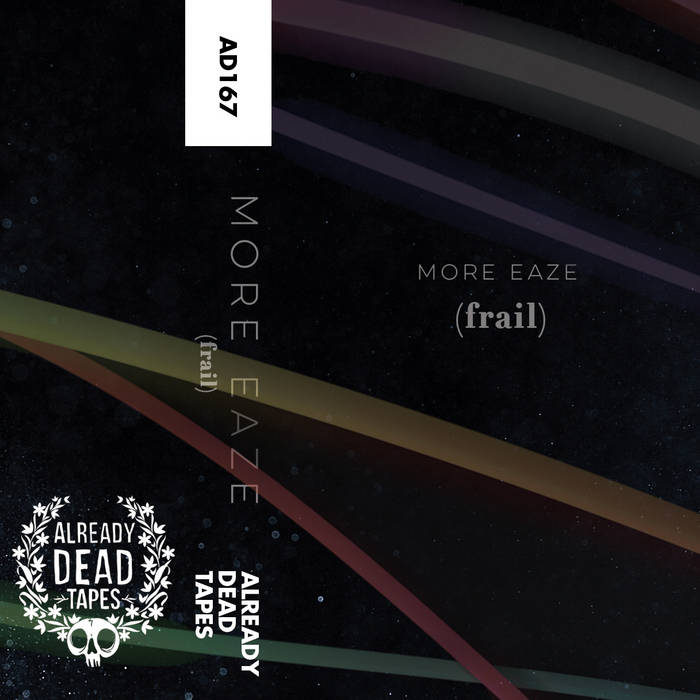 "More Eaze’s (frail) is a strange album. For anyone interested in underground experimental music being released on cassettes in limited editions by a non-commercial label, that may seem like an empty statement. But no, I’m telling you, this is a STRANGE album. This release successfully combines experimental soundscapes and pop songs, sometimes juxtaposed, sometimes intertwined, but always unfolding before the listener at whatever pace More Eaze has deemed necessary, sometimes to unorthodox lengths.
Really, this is of no surprise once it is revealed that the artist known as More Eaze is in fact Marcus Rubio, whose 2014 release on Already Dead Tapes, Land of Disenfranchisement, contained plenty of noisy experimental elements amidst tightly constructed pop songs. As More Eaze, Rubio seems to have stretched out and expanded on the former aspect while still maintaining elements of the latter, albeit in reduced emphasis in the entirety of the album. For example, the album opener “Oak and Sea” contains several minutes of ambient noise that begins as a crisp breeze but gradually builds to nearly sounding like harsh wall noise by the four-minute mark. The storm suddenly subsides to reveal a slowed down vocal singing what may have been at one time a gentle acoustic ballad but with the manipulation it is hard to tell. A layered talk box vocal that sounds like Roger Troutman’s signature Zapp vocal (think “More Bounce to the Ounce”) enters and harmonizes beautifully over this. The track blossoms into a fully-realized song. It’s almost difficult to pinpoint exactly when this happens on the track, and the song almost abruptly shifts into a shrill glow of noise that ends the cut. Such are the strange compositional aesthetics of (frail).
The first of two titular cuts on the album steps further into musique concrete. A collage of found sound is sampled into mayhem for a few minutes. A sparse beat has formed by the four-minute mark. Flash forward to the six-minute mark when strings enter and create the first semblance of melody on the track, and it’s quite an eerie melody to boot! A synthesizer provides a simple hook that, to these ears, resembles the sound effect that might be used on a deeply submerged submarine in an old Hollywood film. And then, out of nothing, a beautiful song emerges from these disparate musical elements that have been building together for the past seven minutes. It feels like the album equivalent of watching a solo artist bring all the organic parts of a song together live with loop pedals. The Zapp vocal dominates this cut, and while this vocal effect could be considered almost contrived in the Autotune age of pop music (or are we in post-Autotune now?), it is at home in the alien soundscapes created on these compositions.
The latter half of the album pulls back on the sound sampling and extended ambience to give more room for songs. “Nope” contains a smooth melody that sounds as though it could have been on the most recent D’Angelo album. The string arrangements also pick up as a dominant feature of the tracks and for the last three cuts (there’s only five total) there’s an R & B feel, but in an outsider lo-fi bedroom way. Natural vocals make a lone appearance on the penultimate song, “New Year’s Eve 2k15,” revealing the voice those familiar with Rubio’s previous work shall recognize. The unaltered voice here makes this song seem separated from all that came before and after, which only further solidifies the idiosyncratic feel to (frail).
It’s difficult to draw comparisons to other artists apart from the previously mentioned examples, and those weren’t comparisons as much as reference points. Perhaps there’s a slight resemblance, at least in a few elements, to old Jim O’Rourke solo records. Maybe if Andrew Weathers got funky and soulful, this is what he might sound like. A truly unique release, those familiar with Rubio’s previous work will find that his songs on (frail) are as satisfying as ever only now they come wrapped in swirling, rustling sounds which are unwrapped in the listener’s ears to reveal the present within."
– Peter Cook, Already Dead Tapes, 2015