Look For Me When You Get Bored

by About a Million 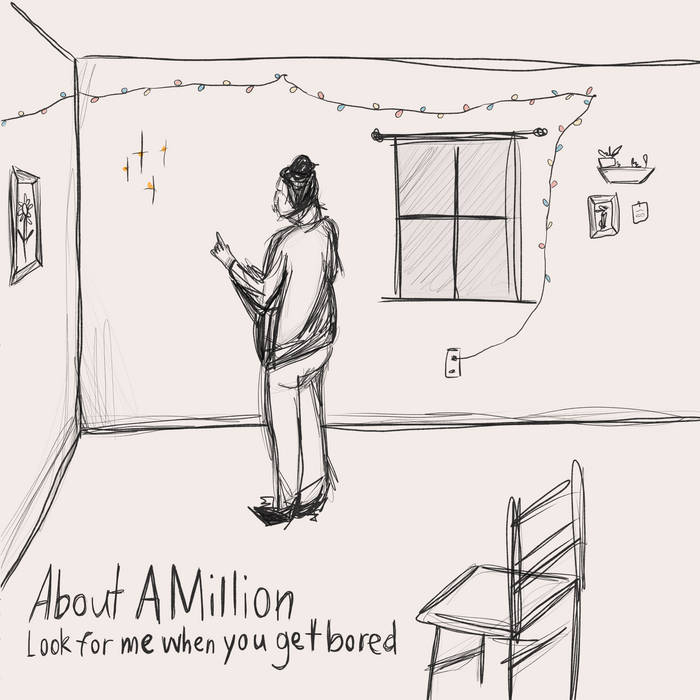 Mitchy boi One of the most underheard bedroom pop gems on bandcamp. If you’re into early modest mouse and Alex G then you’re doing yourself a disservice by not giving this a listen.

"On his thirteenth album under the About A Million moniker—the third to be released through Already Dead Tapes—songwriter Anthony Leitch celebrates the passing of time by perfectly encapsulating his daily happenings and feelings into twelve succinct tunes that collectively span half an hour.

'Look for Me When You Get Bored' was recorded between January and July of 2016 at Leitch’s house in Elverson, PA while he was unemployed after being fired from his job, choosing to stay home and work on new music for a few months. “My wife was hangin’ out one day playing piano when I heard her play the first chords to “Admit,” recalls Leitch. “I knew right away that I was making a full album with that song as the intro.” Leitch followed through on this creative impulse by writing, recording, and playing the rest of the album himself, with the exception of his little brother, Kyle Leitch, playing drums on the track “Brain Goes Numb.” The record was mastered by his older brother, Scotty Leitch, at his studio in Philadelphia.

“Life is like falling on your face, getting up and not complaining/Make yourself go outside and start the day/If you don’t you’ll sit around and just hesitate/Or hide your face and make it all just go away/It’s up to you to stop complaining.” So advises Leitch to the listener—and perhaps himself —on the album opener “Admit.” The chords which spawned the entire project pulse warmly and welcomingly. This morale booster contains a vocal army of Anthonies panned all over the mix and a big distortion-soaked chorus that Built to Spill would envy. This track is followed by “Ant,” a total mood change from the opening song. The instrumental breaks (which seem to function in place of a chorus) have the feel of driving in a warm rain on back country roads while the verses are a rapid-fire narrative with accompanying falsetto throughout. Think Bob Dylan’s “As I Went Out One Morning” meets Belle and Sebastian’s “Sleep the Clock Around,” two classic second tracks.

Things slow down on “Caught Up,” which at just over four minutes is the album’s longest song. Lyrically minimal, the song waltzes along as synthesized strings gracefully punctuate the lamentation of being “caught up in this world.” Next comes one of the shortest songs, “Brain Goes Numb,” a wistful number which could have been a strong song contribution from James Iha on a mid-90s Smashing Pumpkins album. “Not Ah” feels like a tale of the assimilating process a couple must go through when they choose to move in together. “Most of the songs are about the day to day situations that I go through with my amazing wife,” confirms Leitch. Side one closer “Don’t Be Afraid” slows things down again to a waltz and slightly resembles Brooklyn’s Told Slant.

Side two kicks off with “Underwater” which deals with another recurring theme throughout the record: growing. After describing where his imagination used to take him as a child in the bathtub, Leitch sings: “I guess I’m growing old/because I only take showers.” Later on the record in the song “Young Bull,” Leitch sings: “I wish I could stay young forever/That way I could break all the rules and get away with it.” There is a sense throughout that Leitch is wary of growing up. “Everyone gets older but some minds stay young,” explains Leitch when asked about this theme. “Sometimes it’s hard to watch other people mature in the way that they do while you’re addicted to creating and almost considered a weirdo for doing the things you love to do.” Interestingly, in “Young Bull,” he also expresses his desire to be old already so that he could be excused from his behavior. It’s that big chunk in the middle of life where everyone expects you to fall in line and bust your hump. It’s like that scene in ARMY OF DARKNESS (1993) where the Deadites are resurrecting skeletons from a graveyard to form an army and the ringleader says to a freshly unearthed skeleton: “Welcome back to the land of the livin’. NOW PICK UP A SHOVEL AND GET DIGGING!”

“I Know You” is a gorgeous number that stylistically recalls the late Jason Molina. On the next cut, “Wakin’ Me Up,” Leitch strongly resembles fellow Pennsylvanian recording artist Alex G but with much less cryptic, far more earnest lyrics that continue the theme of cohabiting with his wife. This is further explored on the album’s shortest song, “Crumble.” Following the aforementioned “Young Bull” comes the album closer, “You.” The keyboard plays what appear to be sustained versions of the same chords that opened the record whilst Leitch sings a tribute to the person responsible for spawning the entire record—his wife. The track ends so abruptly that it seems designed to loop back to the beginning of the album.

Often nostalgic and incredibly transparent, 'Look for Me When You Get Bored' may be About A Million’s definitive statement. The proof is in the pudding that Leitch’s hiatus from the daily grind was successful. “I finally had the time to be who I really am without having to forcefully brush the work dust off my shoulder after getting home,” says Leitch. This may further explain some of the themes of the record, too: aging, being caught up, etc. In the DIY world, once adulthood has set in, musicians are not often afforded the luxury of having large chunks of time to determine exactly what they are trying to say and how to say it. Thankfully, Leitch followed through on this rare opportunity."