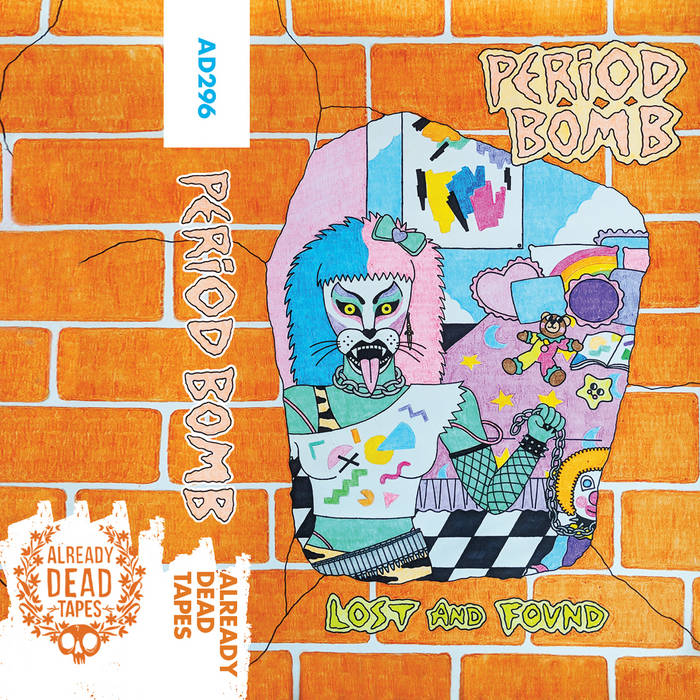 "This new “album” from Period Bomb is really a set of demo recordings spanning over a large swathe of time but don’t be fooled by the “demos” tag. Period Bomb, from Miami, Florida (and decamping to Germany soon allegedly)—all-around citizens of the underground world at large—create art by way of process; in this case the demos are as real as the “real thing.” They are the finished pieces in and of themselves. These are pieces constantly being reworked and retweaked on the endless road. These recordings jump through time and different lineup components but the whole thing feels like an album proper. Welcome to Cam and DJ’s haunted funhouse refraction of America.

P Bomb are true iconoclasts, freaks, punks... take your pick. These are overused terms obviously but in their case they more than apply. While a legacy of Miami grime infuses their music and art, the music jumps around a wealth of outsider/avant/punk styles, shifting from aggressive noise rock, no wave, and art punk to ultra-haunted, spooky mutant jams reminiscent of Throbbing Gristle or Angels In America. There are angular, spiky arrangements and weirdo electronic fuckery leaps. There are fucked up psychOdelic collage jams reminiscent of Faust or the Residents. P Bomb is just following their own internal logic though. They are by no means out to ape any hip “important” bands of yesteryear and this isn’t about sonic signifiers. P Bomb is the feeling, the total vibe. They’re critiquing pop music and the image consciousness that permeates Western pop culture currently at the most fucked up of times.

They’re also just out to “have a good time”… there’s a tune about smoking marijuana which always rules and whether some of this stuff is parodic or not, there are countless twisted pop gems. There are also plenty of honest to gawd KILLER barbed hooks and gorgeous MELODIES that could only come from this gang of freaks. There is a sense of ATMOSPHERE in this music, almost cinematic in scope. These are artists that possess that most elusive quality nowadays of VISION.

The album totally echoes the throbbing sounds of thousands of American basements. The music rules and there are also weird skits, warped voicemails, sounds of toilets flushing, cryptic inside jokes and an all-around damaged internal logic, a unique tribal language.

P Bomb as of this writing is centered around the core duo of Cam and DJ but these recordings feature their greater cabal and extended freak family. I’m not going to list them here but peep the credits. There are so many auxiliary LEGENDS involved with and part of these recordings. It is mind-boggling for nerds like me.

Hear it now before Feeding Tube or whomever represses it on wax in 6-10 years time. If you live in NYC, I’m inviting YOU personally to come smoke weed with me out of my haunted bong at the skinny apartment while we rip this tape. This is an open invitation but ACT FAST! I will convert you, make you a full on believer of P Bomb, the truest ambassadors of that elusive underground sound/art/life."