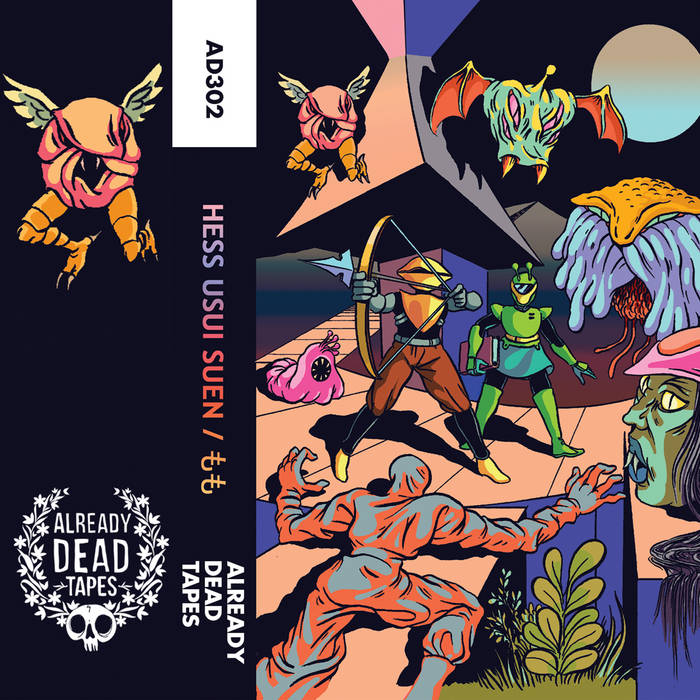 "Though not necessarily common knowledge, most people who have put their ears in or near experimental music circles are aware that Japan has been a primary exporter of various unconventional sounds since the late sixties. On 'もも (MOMO),' we find three musicians, Joe Hess, Kenji Usui, and Mabel Suen who have cut their teeth on noise rock who got to make a free-jazz album in Japan.

Hess and Suen play together in the jazz-leaning punk band Complainer, with Hess moonlighting as one-half of free-jazz outfit Fuck Lungs. Meanwhile, Usui was in the noise rock band An Atomic Whirl who relentlessly toured America for a few years.

The trio starts out guns blazing on “Dead Dance,” a distorted bass and jazzy percussion constantly on the verge of locking into a steady groove but refusing to do so for very long; all the while a relatively serene saxophone glistens over the rough surface. Things cool down and come together as the track winds down, only to burst into another frenzy of sound on the next cut, “Soft Machine.” Perhaps a nod to the band of the same name, the piece is as jazzy and spastic as the legendary Canterbury group's most extreme moments. Also on this piece, Usui scats over the the instrumentation in the manner of Damo Suzuki during the middle section of Can’s “Peking O.” The next track, “Very Very Cursed,” follows in similar fashion sans scatting.

The title of the next track conjures up a hypothetical scenario: as punishment for all of this unrestrained playing, a judge sentences the trio to slow down and mellow out on “Gavel.” This piece is still in the free-jazz vein, but takes a sedated approach with more space between notes. In the grand scheme of things, this track seems like a mercy break. After three and a half minutes of chill-out time, we are forewarned of things to come by a series of sustained, distorted bass notes, and then propelled into the deep waters of “Memory Bath.” The music here, though driven by ferocious drumming, isn’t even so much spastic as much as it is dense. Following this, “Steel Feelers” is more abstract and sparse, though quite unsettling. Certainly not the breather that the group gave the listener with "Gavel."

“Baba Yaga” almost sounds like it could be an Albert Ayler cut if only the saxophone found a specific melodic phrase to repeat (that doesn’t seem on the agenda here). After this bit of brevity, the trio really stretches things out on “Seven Heavens.” Clocking in at just over eight minutes, it's the longest track on the album and the trio does not relent on its high energy for a single second. After a brief pause at its conclusion—for what sounds like possibly television dialogue or airport announcements—the group burst into the penultimate number, “Doom (Train Stopping in Slow Motion)” and it’s even more intense than its predecessor. Fittingly, Hess, Usui, and Suen take things down several notches on “Yamanaka-ko,” even finding a few sweet melodic passages on the saxophone in the process.

It’s a release with a lot of integrity that scarcely wavers from its free-jazz mission. It also remains steadfastly “punk” throughout, at least in spirit. Put this one on when you need to escape from the everyday struggle."