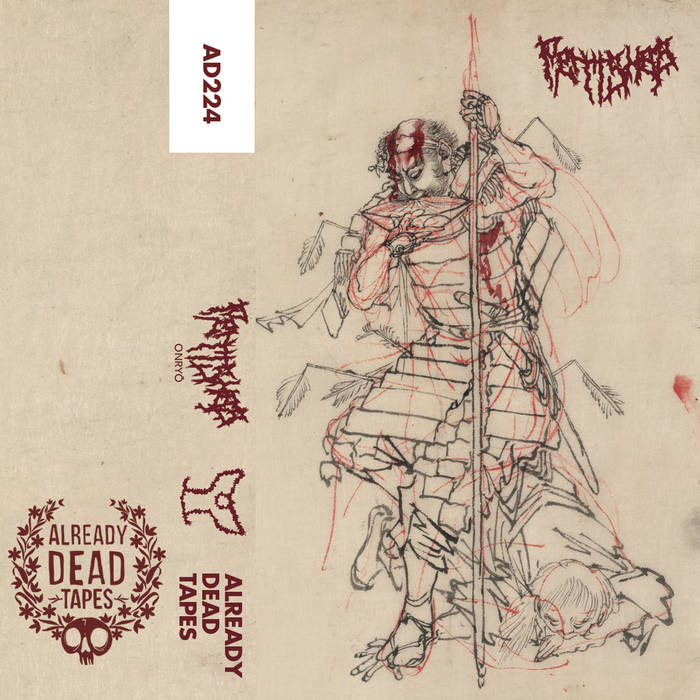 "This new and first Fetishes album is coming out just in time for Halloween, boils & ghouls!

Straight from the Dungeon, one man goblin creeper, Isaiah “Idie” David brews some wicked occult/dark magic vibes on this truly haunted tape. Drink in the cauldron though and you’ll be rewarded if you’re down with this kind of thing (I certainly am)!

The tape opens up sounding like a slasher movie, with dark forest winds and cabin creeks. EVIL DEAD (1981) but like “Evil”, not silly. The sense of impending dread continues long on late into the night. There’s some Japanese speech samples over screeching feedback/high pitched frequencies, sounds like something forbidden that I shouldn’t be hearing. Like some sort of found tape/snuff film/creeper vibe. Definite field recordings from the end of “a” world. Plus cathedral bells which always rules! The second track features a woman screaming (or laughing?) as ominous tones swell up in the background…definite “what the fuck” vibes in the best way possible. This devolves into full on skeleton crew howling miasma. I’m seeing through the killer’s eyes, giallo style. Track 3 opens up with an actual distant storm in the background, complete with howling winds possibly contact mic induced. Plus hissing phantoms in the fog. Lovecraftian for sure. This track eventually dips into serious Japanese style harsh noise territory. Won’t spoil track 4 for you.

The whole thing is bathed in swamp haze and it also reminds me of THE WICKER MAN (1973) and ROSEMARY'S BABY (1968) among other things. Soundtrack to an exorcism in lower manhattan? Who cares, this thing rips. Soundtrack to the emergence of fledgling hell spawn, more evil than the recent rash of black metal revivalists for sure.

It’s an epic and heavy slow burn. No point in pointing out track highlights as it’s 4 monolithic slabs of ritual gloom. This baby flows as one long piece. And its like 80 minutes, perfect to sync up to any of the films/horror movies I’ve referenced previously. Put one on silent with this on in the background. I dare you. Hell, I’ll host a viewing with a film of Idie’s choice and this on as the soundtrack and you’re invited! If you’re not down with extreme horror/slasher movies/demonic shit, Gremlins could work too, just throwing that out there. If you’re weird like me, you might even sync this up to BEETHOVEN (1992) (dog movie, not the composer) or like BABY'S DAY OUT (1994), why not right?

It’s not fair to compare this to other jammers but it definitely reminds me of darker early Skaters trips, Tarpit(reppin’ the MUG crew in Detroit), Double Leopards ecstatic moan castle rituals, aforementioned Japanese jammers, and local homie KHF’s stabbed sky transmissions although it doesn’t “sound” like any of these folks. It’s more of a vibe really. A foggy cloaked vibe. To me much more of a cinematic thing clearly.

This ain’t Mahavishnu Orchestra or Beck. This one’s got teeth, sharp ones.

Horror to me is very psychedelic inherently and this hits that zone for sure.

Personal biases aside, damn man, Already Dead is killing it as far as being the ultimate purveyors of “underground” music with no barriers. This is one of the lengthier/headier excursions in the recent discography for sure, you, constant reader (King reference) and me both are gonna have to spend a lot of time for this one to really sink its tendrils into our veins. Or its fangs into our necks….had to go there, there’s definite coffin vibes in our midst/mist…..

Throw this on and scare the neighbors. This is far out and certainly damaged. I suppose this is what some reviewers refer to as “art music”. Call it noise, drone, horror core, country funk, ambient, musique concrete, whatever dawg. To me everything is rock & roll and this certainly fits the bill. I throw up the devil horns on this one!”

All tracks recorded live with no overdubs. All instruments by Mr. Q.