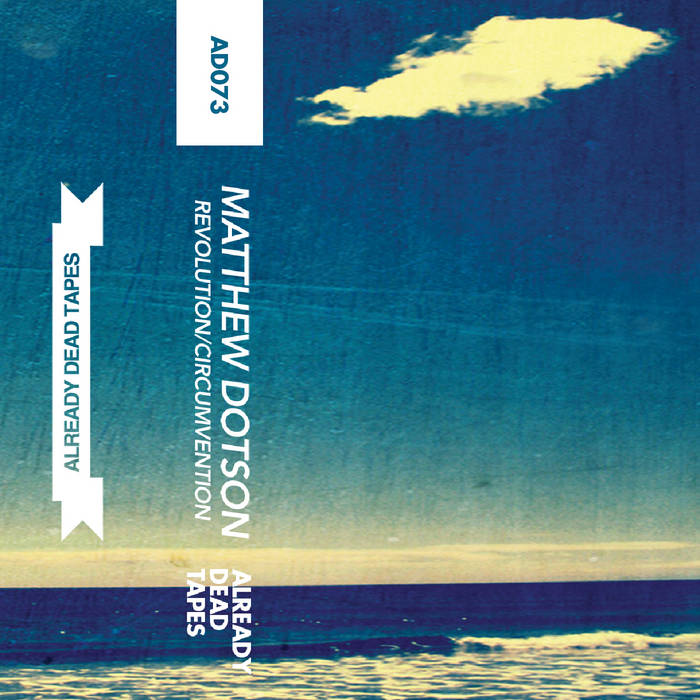 "LA's Matthew Dotson has a trance inducer on his hands. Released by Already Dead Tapes, Revolution/Circumvention is two nearly twenty-minute rolling/rollicking collages of sound. These two compositions are cleanly rendered and evocative. As a fan of John Lennon's piece "Revolution #9," I thought it was a smart sample and a good starting point for a piece that essentially starts where that track ends. Like a lot of music released on cassette Lennon's decidedly "experimental" late 60s records with Yoko Ono wouldn't be out of place in today's tape scene. The difference here is the amount of FUN music interjected. Beats, video game soundtrack (esque) snippets burst through in between the amorphous blobs of slow moving sound. "Circumvention" begins with mangled loops of sitar and acoustic guitars (kinda like a Beck tune from way back when)...and did I mention "mangled?" The slices of sound playfully sound like your machine munching on your favorite jam. The second composition is the dirtier of the two here and maybe a bit more focused on "rock" music as its source. In the end: Both sides offer a lot for the listener who wants to be reminded of everything all at once."
- Jeff Daily, Cassette Gods

"As the revival of the tape label continues to enrich our lives with warm analog hiss and affordable production/retail costs, certain genres stick out within our growing collections as Especially Cassette-Friendly. Too many lush ambient/drone tape releases to ever keep track of wash ashore each day (see: Constellation Tatsu, Tranquility Tapes, Field Hymns), while aural terrorists can maintain a prolific assault on their fans via any number of noise merchants (American Tapes, Chondritic Sound, Fag Tapes). Lo-fi rock or experimental pop projects embrace the unique sonics of doin’ it straight-to-tape (Moon Glyph, Night People, some of NNA’s catalog), just as beat conductas gravitate to the medium for its low-end boost and compressed visual aesthetic (see Stones Throw’s cassette renaissance).

L.A.-based multi-instrumentalist Matthew Dotson takes a look at this taxonomy of tape-friendly genres, checks off all of ‘em, and pencils in a few that were missing. 2012’s Excavation overflowed with ideas, but Revolution/Circumvention (Already Dead, and already sold-out) manages to cram even more into 36 maximized minutes. The album’s two sidelong suites segue through so many styles: layered drone washes collide with a synth-pop beach-party; hip-hop beats thud alongside searing noise; acoustic guitar interludes hang out with abstracted IDM squelches. By never establishing firm ground to stand on, Dotson subverts expectations with every juxtaposition. What he lacks in cohesion, he makes up for with technical mastery, uniting disparate passages with a uniformly impressive level of production detail. If sampling the Revolution/Circumvention stream on Bandcamp feels like a shuffle through a particularly Zone-friendly iTunes library, sitting at home with the album in your tape deck feels like a friendly visit from a Zone-conquering mastermind."
- Chocolate Grinder, Tiny Mix Tapes

"Last year, Chicago’s Matthew Dotson released a little cassette called Excavation, which was simultaneously creative, promising, maddening, and memorable. The new Revolution / Circumvention continues in this vein, but the music is no longer maddening; frustration has been replaced by intrigue.

Excavation was frustrating because it didn’t quite hold together. The album was an oft-haphazard tangle of amazing segments separated by sprawling interludes. A mixture of ambient, drone, electronics and feedback, it produced moments of beauty and angst: the chimes and thickness of Side A’s conclusion and the wild tumbling timbres of Side B. These included red zone drums and thrums (3:52), IDM-influenced glitch (11:20), and Old West guitar ambience supported by club bass (15:40).

On Revolution / Circumvention, Dotson puts it all together to form something much more cohesive. The tumbling timbres now serve a greater narrative. By integrating his vast array of sound sources, Dotson comes close to a modern electronic symphony. There’s little hesitation this time around, as Dotson jumps right in. ”Revolution” launches with three simultaneous sounds: children, a marching band, and a narrator, whose first words are, “The twist.” By the second minute, a beat has already developed, blossoming at 2:17 into something clubworthy and deep. So will we be dancing to this beat for the full 18:26? No, not with Dotson at the helm. By the fourth minute, every other beat has vanished while a series of bells begins to toll. By the fifth, the beat is gone, replaced by vibrations, pulses, and backmasking. Think of it as an experimental version of The Avalanches. In the sixth minute, the track begins to sound like the work of The Caretaker; in the seventh, a lost 80s dance track. But Dotson has learned a few things in the past few months, including the value of repeating themes; a piano motif reappears on the other side of the drums, while the chimes recur a bit later. The repetition helps listeners to view the piece as a single track rather than as a mix. Only in the fourteenth and fifteenth minutes does the piece falter a bit, as dueling tempos vie for supremacy; nothing that can’t be fixed with a smooth iron.

“Circumvention” begins in a much more subdued fashion, sounding for the first three minutes like a smoke-filled hookah lounge. Then the electric guitars and drums arrive; now, everybody’s dancing. After a pause, the tempo increases, the sweat pours, and one may start to ask, “Why doesn’t Dotson make 12″ dance records?” The answer is simple: that would be too average a path. Dotson isn’t interested in the maudlin or the mainstream. Content (for now) to remain on the outskirts, he’s walking a lonelier road, fraught with greater difficulty but greater potential reward.

Revolution / Circumvention presents a blend that few have encountered: electronic, beat-driven soundscape. When the fuzz leaps to the fore at 8:54 of “Circumvention”, one thinks the rarest of thoughts: this is something new. In retrospect, Excavation now seems prescient, the beginning of something magnificent and as yet unnamed."
- Richard Allen, A Closer Listen

"Circumvention/ Revolution is like skin soaked in the waters of Lake Michigan in the first month spring; body plunged in past your naval and particles of dead sea creatures sift with sand in the cracks of your toe nails.

Matt Dotson’s second release, and Already Dead Tapes & Records 73rd which premiered Thursday April 25th, isn’t as shocking as that first dip into the water and introduces listeners to noise composition in a manner less abrasive than glitching, screeching, or endless violins screeching blistering their bows against plaid covered drywall.

Indie guitar riffs blasts off “circumvention”, the first song of the album which takes up all 17 minutes and 41 seconds of Side A, with “revolution” comprising the whole of Side B. Guitars invite the casual listener like the lapping first waves on the beach–something familiar and soft–as a nasty little synth-twiddle, an electronic beat which comprises the backbone of the rest the album, is also introduced.

Upbeat, 16-bit electric danceable tunes continue to resurface, but this is the last time anyone will hear the guitar in its actual form–ostinato carries on the remnants of its nylon and wooden sound throughout the album through heavy, repeated distortion. With the quick, deceptive beginning of the song luring in those that aren’t familiar with the genre, the album depends on loops and circles of experimental patterns played with in harmony with one another to keep their brains plugged in.

Pulses checked, Dotson creates a host of sound creations: terrifying, whirring found sound up into a mechanical monster, humming with clashes of metal and the hiss of steam in the background. Great gaps of pops and gargles grasp like the jaws of the hideous beast glitching and falling apart as soon as it was formed and into a new soundscape. Scenes of grey, static, crumbling decay are all put together with living noises collected outside of the studio, and those that sit through to let their ears pick through the salon of sound are rewarded with magnificent auditory images.

Patience, however, is as easily acquired as taking water out of the ocean with nothing but our hands. Dotson challenges listeners to sit down and allow his 40 minute two song mosaic to either wash over them entirely, or push far out into the background behind washed dishes or garlic cooking in the oven. Circumvention/ Revolution is chill, but if you aren’t bundled up it can be downright chilly.

For those that want to take a dive into noise composition for the first time, though, this would be soothing introduction. The limited release of 40 cassettes with cover serene art by Katie Levi can be ordered electronically or bought in digital form at Already Dead Tapes, or picked up Corner Record Shop here in Kalamazoo."
- Zac Clark, Kalamazoo Local Music