by More Eaze / The Freebiez 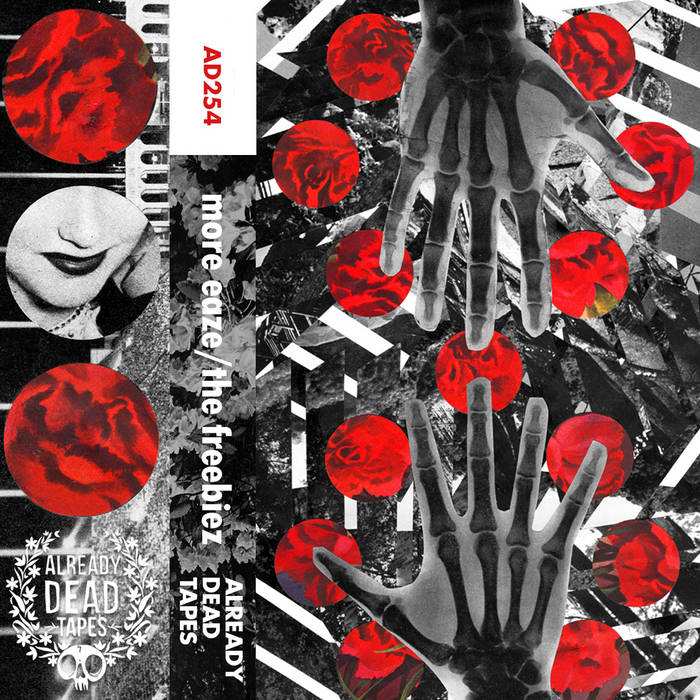 "This double feature from Already Dead Tapes consists of two Texas acts that are heavily soaked in synthesizers and dripping with gooey pop goodness, albeit that of an experimental nature.

First up is More Eaze (aka Marcus Rubio) hailing from Austin. No stranger to anyone following Already Dead Tapes, he recently put out a split with Mu Vonz back in April on the label. It is evident within the opening moments of the first cut, “Entertaining Distractions pt. 2,” that this will be a sprawling synth epic. Reminiscent of Klaus Dinger’s post-Neu! project, La Düsseldorf, and maybe Tangerine Dream at their less eerie (the “happy” section of “Monolight,” for instance), the piece begins to pulse about one minute into the track and continues to slowly build until the nine-minute mark . At this point, everything is pulled back in the mix except for the aforementioned pulsating oscillation. The other instruments are slowly reintroduced over the remaining four minutes before the piece comes to its shimmering conclusion. The vocals on this track are glazed in a thick layer of vocoder, making it difficult to determine if there is a lyrical connection to part one of “Entertaining Distractions” which appeared as the titular track on a 2015 mixtape. The second and final song on More Eaze’s half, “Caught a Body,” clocks in at under four minutes, features some guitar playing in addition to synth work, and contains a more conventional vocal and song structure, at least when compared to what came before. This delightful little slice of pop would be perfectly at home on any given R. Stevie Moore release.

San Antonio’s The Freebiez split their song lengths more evenly, with both tracks clocking in just shy of ten minutes. Side opener “Patricia” begins fairly aggressively; were it any faster and harder it might resemble synth-punk pioneers The Units. Things then chill out to more of a Tuxedomoon level. An early Zappa-esque vocal melody (think “The Duke of Prunes”) follows in unison with the synth lead on the verses, somberly weaving through clattering percussion. The post-punk vibe creeps back in during instrumental breaks as the synthesizers crawl and rumble across the track. Eventually this section veers into sounding like something Ween may have produced in their four-track phase (see the solo on “Tender Situation”). The final track on the split, “ch4rli3 br0wn,” may actually be the strongest link stylistically to the first song on the More Eaze side. Not to say it doesn’t have its own thing going on. The track contains a few entirely tacit moments which help to shift gears. A long instrumental middle section divides up the song, eventually becoming quite noisy. The vocoder vocal which graces the first three minutes of the track does not return until the last couple minutes. Looping back to the beginning of the More Eaze side after this track feels smooth and natural.

Highly recommended for fans of both experimental electronic music and synth-pop."