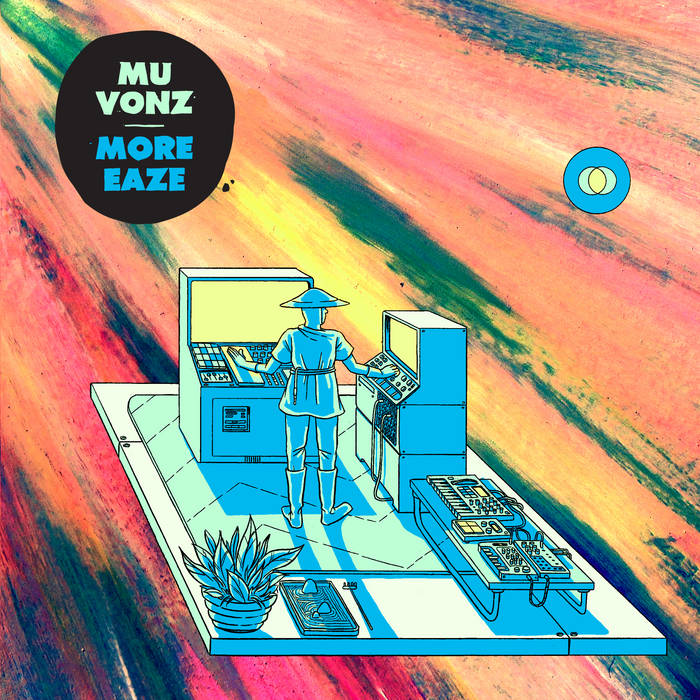 "About a year ago I had the idea to bring together two of my favorite artists for a special split vinyl release. With most, if not all of our output, it's our artists approaching us with concepts and albums. This was a rare opportunity to curate something from two musicians that are very dear to me, two people, who in my opinion, truly embody the values and drive of Already Dead.

I first heard More Eaze when he was writing and performing under 'Marcus Rubio' and sent me the criminally overlooked 'h_h' album, which we ended up releasing in 2013. That album was unlike anything I had heard, it fused genres that no one was fusing. It was bold. It was a strange, beautiful album that left a lasting impression on me. It felt like Marcus was truly being himself, creating something totally his, not being different for the sake of "cool", but for genuine self expression.

In 2014 I received a short, kind introductory email from Mu Vonz. He mentioned his appreciation for what we were doing, and that he hoped to find a like-minded label for his newly finished album 'Lub Dub'. Attached to that email were three tracks, "Lo-Life", "Boomerang", and "Wait". Over the next few days I streamed those tracks over and over, I must've listened to "Lo-Life" at least a dozen times on repeat. Again, these songs felt so uniquely this person, something created with no pretense, something not quite like anything I had heard.

Mu Vonz's "Hypnotize" is an infectious track, the kind I want to have on repeat all day. It's a natural progression from his work on 'Lub Dub' and 'Blasé', continuing to explore new concepts and incorporate new genres and sounds. It has that spoken word soaked in hip-hop and RnB vocal style, set against a house-infused beat and lush electronic melodies that make you want to get up and move. This is a track that builds and flows, impossible to pin down to any one genre or style.

More Eaze's "Binaries" is a surprisingly catchy and listenable track, considering the vast amount of stylistic changes it undergoes in its five-and-a-half minute running time. This track sees Marcus returning, at least momentarily, to some of the pop stylings that made '(frail)' and 'Land of Disenfranchisement' such engaging listens. This is the kind of song you can listen to dozens of times and always take away or notice something new. This track effortlessly fuses experimental electronic, orchestral pop, and classical, for a piece that feels like a great representation of Marcus' work.

Mu Vonz and More Eaze each make strikingly unique music. Though the music each releases is quite different, both bring elements of pop and RnB, (and so much more), to experimental electronic music in a way that isn't really being done elsewhere. Packaged in phenomenal artwork by Curtis Tinsley, we've put together a 7" I'm extremely excited to own, and very proud to offer on Already Dead."
- Joshua Tabbia, Already Dead Tapes, 2017