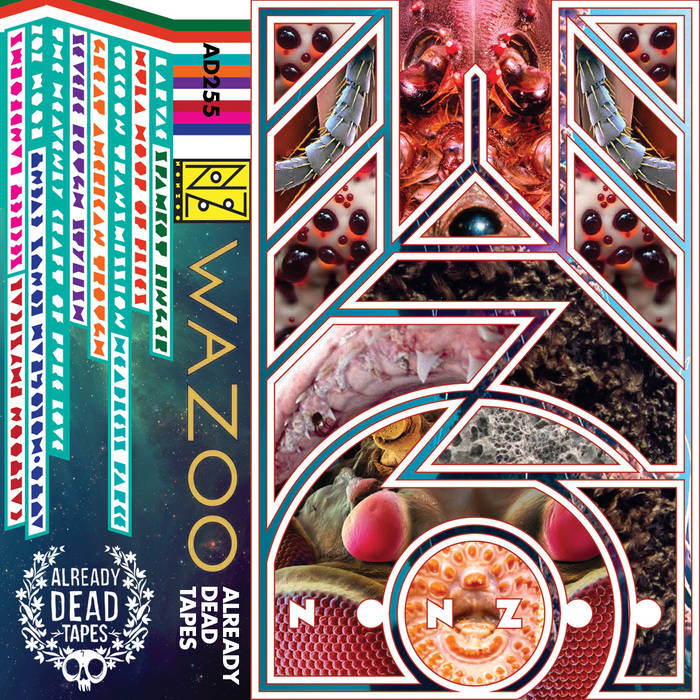 "Fans of noisy, experimental rock music are in for a treat when they pop this Nonzoo cassette into their tape deck. 'Wazoo,' the debut full-length from the Chicago-based quartet, brings the ruckus in the vein of classic nineties and aughties noise rock championed by labels such as Siltbreeze, Gold Standard Laboratories, and Skin Graft. One could even dip further back to the No Wave acts of the late seventies such as DNA or Teenage Jesus and the Jerks for reference.

The latter group is particularly fitting as Nonzoo’s vocalist sometimes bears a striking resemblance to Lydia Lunch’s earliest recorded material with both TJaTJ and 8 Eyed Spy. Throw in the occasional caterwauling a la Chloe Lum of AIDS Wolf and Su Tissue of Suburban Lawns for good measure. The vocals are mixed so low that they function more as another instrument rather than the main focus.

The instrumentation is the standard guitar-bass-drums setup, though rarely does it sound as though these are what are being played. On tracks like “Spambot Ringer” and “Secret Landforms,” the band bashes away on their axes with even more reckless abandon than the Jesus Lizard at their most unhinged. At other times, on tracks such as “Cocoon Transmission” and “Severe Rough Stylish,” Nonzoo drift off into sparse, spacy sounds and loose grooves which recall Northhampton, MA avant-rockers Fat Worm of Error as well as San Francisco’s Caroliner. Sometimes they play the beat a bit more straightforward, while still being incredibly strange. “Great American Trough” and “Auto-Hologram Bonus Event” are good examples of this; on the former, Nonzoo almost sounds like the Magic Band in hyperdrive and on the latter, they ape Arab on Radar (when they still had a bassist in the early days) to a T.

While the sound will undoubtedly be unsettling and off-putting to ears unaccustomed to such an approach, there is an underlying playfulness to the band that may ultimately serve as a gateway into the madness for the uninitiated. The song title “The Heavenly Craft of Pure Love” appears to be wordplay on author H.P. Lovecraft’s name. Album closer “Room 202” slowly evolves from a disturbing nightmare soundscape into an orchestra of looping laughter and screams that somehow feels more transcendent than terrifying. As can be expected with this style, the hooks on 'Wazoo' begin to reveal themselves upon repeated listens. This appears to be composed and organized within its own chaos. Perhaps there are improvisational tendencies but overall it feels quite deliberate and intentional.

Recommended if you like any of the aforementioned bands/labels, Deerhoof, PRE, An Albatross, Erase Errata, Melt-Banana, Boredoms, Dada art, post-punk, and music ‘designed to annoy people to the point where they might just for a second question enough of their environment to do something about it.’ Frank Zappa said that of his own music."