you wish us both in the water 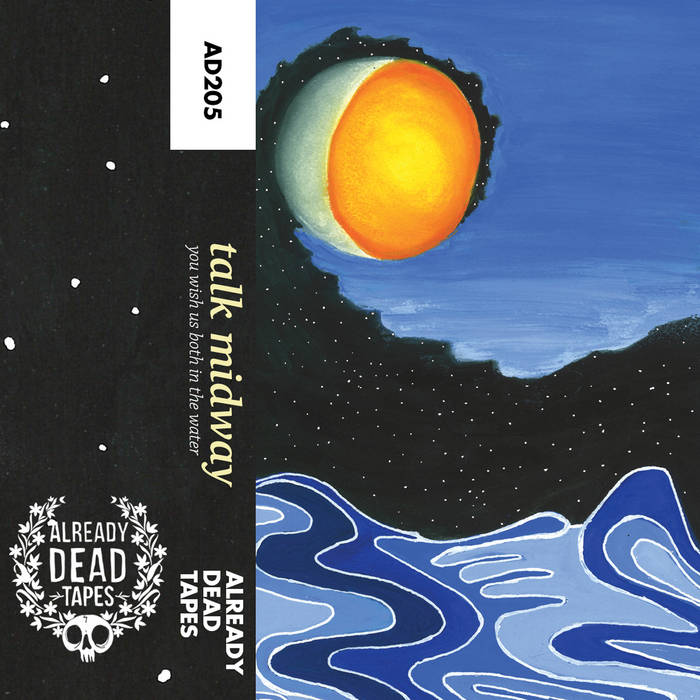 "Talk Midway's 'you wish us both in the water' contains seven ambient instrumental tracks of synthesizers and acoustic guitars combined with field recordings. These seven pieces represent a complete day/night cycle, condensing twenty four hours into one hour. Side A symbolizes day and light, while B is night and dark.

Side A's titles are "Dawn," "Midmorning," "Afternoon," and "Dusk." Each step of the way, instrumental patterns are slowly introduced and repeated, forming layers as the field recordings create a sense of the hustle and bustle of human activity, and the changes that happen over time in a setting. Sometimes the distant human voices muddied in echo combined with the sounds of moving water create the illusion of a subway station. In fact, at moments, the field recordings are clearly coming from this exact setting. Patrick Nylen, sole member of Talk Midway, has described the release as "an ode to the great subway musicians and the music I'd make if I were a 4-person subway band playing old guitars and bad synths." These pieces move at a human pace and allow the listener to feel as though they're at the center of the changes, unaffected in a stillness or a sanctuary bubble, observing as the world shifts around them throughout the day. Gradually one gets the sense that this is not twenty four hours observed from one location. It feels as though we are moving from one setting to another throughout the day. The title tells you when and the music tells you where.

Side B is a change of pace. The guitars disappear and the synthesizers slow down, as does the water. Insects and wildlife around a pond are the presence of water and life on side opener "Night." Wind chimes seem to have replaced the guitar. Human voices have disappeared. Listening to this recording while in a cabin in the woods by a small lake made it difficult for me to distinguish what sounds were coming from the recording and what was coming from outside. Moving water and human voices return for the next track, "Waking Night," but the feeling that human activity has retreated continues. The world we are observing is now moving at nature's pace. The final piece, "Dreaming Night," evokes the feeling of floating in a boat on the water. Lines delivered by a character played by Crispin Glover in Jim Jarmusch's DEAD MAN (1995) came creeping into my mind: "And doesn't it remind you of when you were in the boat, and then later that night, you were lying, looking up at the ceiling, and the water in your head was not dissimilar from the landscape, and you think to yourself, 'Why is it that the landscape is moving, but the boat is still?'"

This release is a great summer soundtrack. Side A could transport you to the beach or the hot town summer in the city, while side B transports the listener to a calmer setting in the woods or on a lake. Recommended if you like Popol Vuh, Mother Mallard's Portable Masterpiece Company, or Jim O'Rourke."