Young Master in Love With Himself 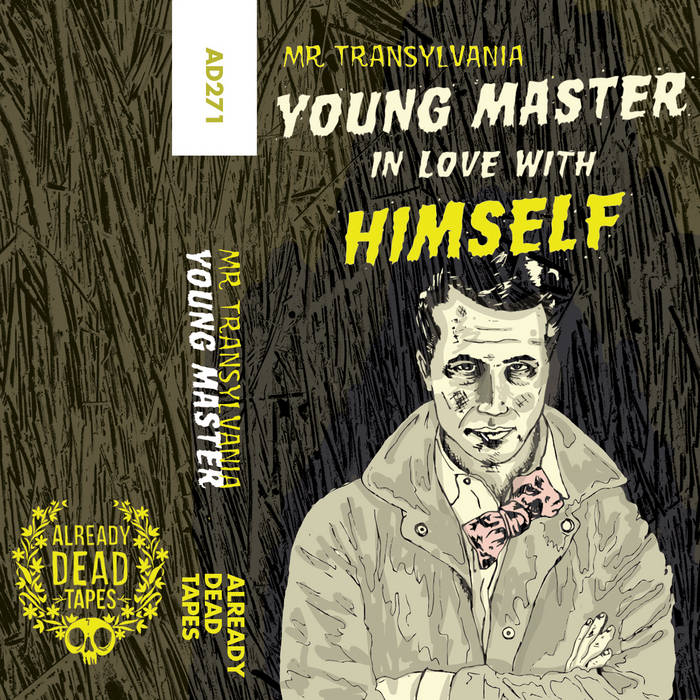 "Mr. Transylvania is an Underground Freak legend from New York City by way of Florida, the true president of the Coffin Club. His new tape lands just in time for an appropriate Halloween on Thanksgiving kind of vibe. With criminally few previous releases including a self-released split tape with Ynnad Zednanref, a split CD-R on Black Lakes with other Florida legends including Skeleton Warrior, and a truly legendary seven-inch from the now-defunct Boston-based Anonymous Dog label (which I’m a proud owner of), 'Young Master In Love With Himself' is more punk than most of the lame four-piece excuses for rock bands we see jamming power chords at clubs, and more avant-garde than most of the hooded knob twiddlers of the basement underground.

Somehow, Already Dead has further cemented its reputation as one of the greatest champions of the real “underground.” This release is totally its own thing, though. Touchstones include a wealth of private press, outsider, real people music references a la Jack Mudurian, Jackie Chan, Five Starcle Men, Count Dracula, Caroliner Rainbow, The Godz (NYC), John Waters, Hair Police, The Residents, Bruce Campbell, Tobe Hooper, acapella hardcore legends Jud Jud, but also old blues field recordings from Folkways or Appalachian confessionals as rendered via the lens of suburbia. This is the kind of underground classic the Austin, Texas-based label Bobby J was championing back in the mid-‘90s. For the true freaks, the true heads. Maybe this would have found a home on American Tapes, amidst a glut of John Olson’s legendary output. Henry Rollins will drool when he inevitably hears this and Byron Coley will rip his own heart out. Too real to be cool.

Since this a music review, I’ll bother with some of the aesthetic limitations of its sonic characteristics. Those too are rendered pretty abstract. Side A, the studio portion, is truly lo-fi and it sounds literally haunted or GHASTLY. There’s weirdo tape warping and it sounds like it is being beamed in from some alien cable station. The term “damaged” gets thrown around a lot, yet this music is actually damaged.

“I’m Gonna Do It One More Time” sounds like radio transmissions from a haunted Native American plain. In fact, I might actually refer it to as blues. “Jerry Lewis” has pitch-shifting ghoulish chipmunk shrieks. “Clocked In” equates shitty low-totem jobs with Hellraiser-esque horror, enhanced by harsh, grating electronics. That’s just side A!

Side B is all live and it’s the Mr. Transylvania most of us are familiar with (or at least those of us “in the know”); references to alligator men, esoteric Florida urban legends (some of which may be lost on me), this is truly the music of the sewers under the strip mall, lessons on what it takes to be a man, with classics like “Cinema ” (an anthem for cinephiles), Mr. T calls out the real poseurs and rocks hard on “Psychedelic Funeral” (which will be a band in the future inspired by this album, if it isn’t already), plus a gnarly rendition of “I’m a Dog” which would be a Grammy-award winning tune if this world made any sense. I’ve witnessed and heard a bunch of these tunes live but hearing them in this light or in this murk presents them in a crustier haze.

These are field recordings from beyond the grave, replete with haunted basement vibes and primitive, ghoulish grime. How many times can I say “haunted” or “basement” or “underground” or “legendary” in this review? Mr. Transylvania is all of those things personified. Get with it! You dig the Lost Boys, or hair blowing in the American wasteland while ripping on a Harley? This is your bible!

Grip this tape before it sells out and before it is eventually re-released on vinyl in seven years’ time. Before NPR makes it less cool! Shit! It’s only twenty-four minutes long, might even take you longer to read this review than to actually listen to the album.

If at all possible, listen to it in a dark crypt (unlike me reviewing it at my desk at the office where I toil away at my “day job”), late at night, at one with the moonlight, lost in the cobwebs. Looking forward to getting baked in that crypt of the mind and jamming this tape in the late night hours. Seriously. Legendary."